Rudi has microdosed three different psychedelic substances; 1P-LSD, truffles and ibogaine, which will be discussed in the order they occurred.

This is currently a legal substance available through Lizard Labs and it’s agents. The reason for its legal status is that it will only convert to LSD once it has metabolised inside the body.

I started to take it on Xmas Day 2015 and my first dosage was a guesstimate at around 20mg this turned out to be very perceptible and thus too much. Not too good when you are on a night shift at the office. Luckily it was only me there so it was not too challenging.

Having allowed a day for integration and another day to rest I dropped 16.5 ug and found that this was less perceptible than 20 ug but still perceptible. This time I was not at the office though, thank goodness.

Another three days later and I tried 12.5 ug which became my standard dosage over the next six months as it was imperceptible.

In retrospect I would say that micro dosing with 1P LSD was a very positive experience. I found that my mental focus improved and that I was less likely to get frustrated when attempting difficult tasks that weren’t proceeding too well. My mental acuity was much improved and I found that my verbal articulation was better too. I wasn’t searching for the right words anymore, they seemed to flow naturally and appeared in my mind just before I needed to use them. Not so many ‘uhms’ and ‘aahs’ as gaps to allow my thought processes to catch up. I also noticed an increase in my sensitivity in social situations and an improvement in my ability to empathise.

Six months later and after a short break I started micro dosing Psilocybin in the form of magic truffles around August 2016.

Again I was unsure as to dosage so I started at 1g and again after a few days settled on about 0.5g as my optimum sub-perceptual dose and this period for micro dosing lasted about three months. Taking a dose every three days. I stopped as before with the 1P LSD when my supply ran out.

I had a similar experience with the microdosing truffles as with the 1P LSD.  Mental focus; mental acuity; verbal articulation; sensitivity in socially situations and empathy all improved considerably but also I noticed an increase in my creative thinking and ability to visualise final outcomes.

Practical creativity improved too and I became more inclined to want to do something creative rather than, say, sit behind the computer. I noticed things in nature more and found my self often investigating and watching butterflies, dragonflies and different plants and flowers in awe of the complexity of their structure and evolution. A small breeze rustling the treetops or a beautiful moonlit night began to take on deeper significance and meaning. My experience with micro dosing psilocybin made me much more sensitive to these things.

Finally after another break for a few months I acquired a tincture of Iboga and began microdosing with this.

Once more after a short period of adjustment I settled on a dose of 6 drops every three days dropped into a small glass of water every morning. This time lasted another six months.

I saw very similar results to those experienced during the 1P LSD and Psilocybin microdosing experiences. Mental focus; mental acuity; verbal articulation; sensitivity in socially situations; empathy; creative thinking; ability to visualise final outcomes; practical creativity and a fascination with nature all improved. A chance encounter with a natterjack toad during this time became deeply significant and seems to presage an entire series of events that followed shortly after involving toads.

However the most significant effect of my micro dosing Iboga is that my sense of care for myself took on a new dimension. Food choices are much more considered and tend towards more healthy, vegetarian or sugar free options. Eating meat or anything dead is something to try to avoid wherever possible and I introduced much more colourful fruit and vegetables into my diet. My choices of things that I want to put in my body are more concerned with the long term health benefits than short term gustatorial pleasure.  Not only this but I am more inclined to walk, cycle or longboard to the shops rather than drive. My regard for my own well being and care for my body and health have become paramount whilst micro dosing Iboga.

Overall I would say my experiences with micro dosing all these different substances has been extremely positive and beneficial. I am a very different person today than I was when first I decided to start this great experiment upon and with myself. An improved version of ‘me’ has emerged.

There is one drawback I would mention. When dosing yourself make sure to do this as early in the day as possible. If you leave it until the afternoon or evening these substances will have an effect on your ability to sleep. Better to skip a day if you forget, rather then take it later and risk losing sleep.

Apart from this minor observation I would say the effects of micro dosing are largely an immense bonus and will perhaps start you on a journey to a new and improved version of yourself that you can now barely imagine.

Microdosing.nl cannot be held responsible for the contents of the experience accounts, nor can we guarantee their truthfulness and accuracy. These written accounts are not necessarily backed by scientific or clinical proof offered by doctors or experts in the subject matter. These experiences should never be taken as advice or recommendation.

photo by: Luz Adriana Villa A. 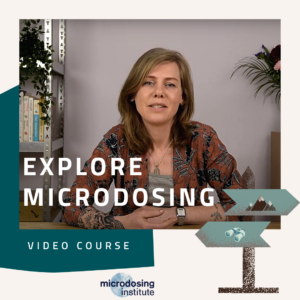